Recycling IPA for 3D Printing with SolvTrue™ by CBG Biotech

As 3D printing adoption continues to expand, demand for IPA to clean parts is increasing in tandem. At Formlabs, we’ve increasingly been having conversations with customers about how to better incorporate sustainability best practices into their print operations. Concerns over the environmental impact of consuming large quantities of IPA, especially for companies printing with a significant amount of resin each week, have many looking for ways to recycle and reuse IPA.

When you couple increased 3D print adoption with the launch of the Form 3L, addressing IPA usage has become an imperative.

When printing in large batches, recycling IPA can save significant sums of money

With use, resin will dissolve and saturate in IPA, weakening its effectiveness. Most users will then look to dispose of the dirtied IPA through a waste disposal company, and then replace it with fresh liquid. As IPA use increases, be it due to large-format printers like the Form 3L, or high volume printer factories such as those for COVID swabs production, this could be a serious cost and environmental concern. Thankfully there is a way to address both of these issues at the same time: investing in an IPA recycler.


There are different solvent recycling systems available depending on the need of your facility. Solvent recycling systems use distillation and fractionation processes to remove solutes from waste solvents, making it possible to reuse a high percentage of the original IPA to wash parts. Recycling IPA reduces waste disposal costs, emissions that are required to produce solvents, and the cost of purchasing IPA, while also giving the end user greater control of their IPA supply and making them less susceptible to supply chain interruptions

Spectra Photopolymers (owned by Formlabs) has been using the CBG Biotech SolvTrue™ S1500 Solvent Recycler for the past six months to recycle IPA used to clean parts for over 100 Form 3 3D printers. Read on to learn more about how their IPA recycler performs, and if it’s worth the investment.

“Due to the amount of IPA we were using, the IPA recycler paid for itself in about one month. It was pretty quick.”
Spectra Photopolymers

Ian Stafford is the plant engineer at Spectra Photopolymers. Spectra has been recycling IPA for several years, originally investing in machines made for recycling small batches of liquid. In 2020 Spectra greatly increased their printing capacity to deal with the influx of COVID cases impacting Ohio, jumping into action to produce thousands of nasopharyngeal test swabs. As the team ramped COVID swab production, the amount of used IPA rapidly increased. Ian investigated multiple different IPA recycliers before settling on the CBG SolvTrue™ S1500 Solvent Recycle.

CBG machines return used IPA to 99% of their original state, meaning they can be reused in the Form Wash. Users should note that this does not mean you save 99% of your IPA - as IPA naturally evaporates while in use. In our experience evaporation will eliminate 20% of your original IPA over the course of one lifecycle, with close to no IPA being lost during the recycling process itself. But the savings offered by the CBG machine significantly reduce the amount of IPA needed for big projects.

Even when purchased solely for use with IPA for 3D printing, the CBG S1500 has an excellent ROI. Ian calculated that their machine paid for itself within 30 days. The Ohio Print Team prints 120-150 build platforms per day, which is then sorted into 32 Form Wash units. At this rate, their CBG machine is running at capacity everyday as IPA in the wash units needs to be recycled every three days.

Due to the volume of 3D printing, it was financially prudent for Ian and the team at Spectra to invest in the S1500. Plus, the team is now saving hundreds of gallons of IPA, reducing their waste footprint and greatly increasing the company's sustainability commitments. 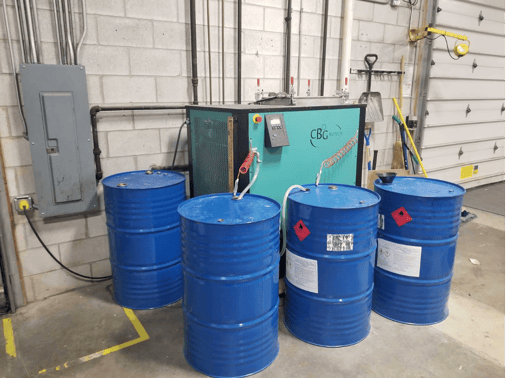 A CBG machine at Spectra Photopolymers

“Now we use the machine everyday, recycling about 25-30 gallons of IPA each day, which we then pour back into the Form Wash, add in some new IPA to replace evaporation, and start the process back up.”
Spectra Photopolymers

Ian recommends an IPA recycling machine even for smaller printer factories of four or more wash units that are running constantly. According to him, “each person has to assess their own ROI, but I think even smaller print farms will see value from it. It’s also important to make sure you map out your floor space to ensure a good workflow. That will further increase the efficiency of your recycling processes.”

Ian recommends teams review their safety and compliance protocols, and to make sure your building and fire codes are being followed and employees are trained. This is important when large amounts of IPA are being stored on-site, which is considered a fire hazard without proper maintenance. Other than these safety compliance measures, Ian finds using IPA recyclers easy to use and install.