Ethanol is a versatile solvent that is used in a variety of applications, for example, forms of ethanol are found in distilled spirits that have been produced and consumed for hundreds of years. Ethanol is a key additive in modified forms, ethyl alcohol is used in hand sanitizer products as we all have learned during the COVID-19 epidemic in the United States.

This versatility makes ethanol a flexible carrier solvent, one which is an effective organic solvent for use in extraction. Ethanol represents one of the safest methods for extraction of essential oils from plant, biomass, hemp and cannabis materials. Ethanol is labeled by the FDA as a Generally Recognized as Safe (GRAS) substance, which means that a panel of qualified experts determined that ethanol is safe to use in food products. Further, ethanol represents an organic solvent that can be scalable as your business needs and demands dictate. 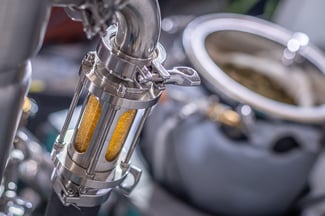 Ethanol is a Safe Solvent

Precautions do need to be taken with ethanol as it is a flammable solvent, but when compared with other methods available in the market for extraction, principally hydrocarbon and CO2 extraction, ethanol represents a far safer solvent. Ethanol is less explosive and toxic when compared to hydrocarbon extraction systems. When compared to CO2 extraction systems, which are operated under high pressure (this creates another potential safety concern, as well as the required infrastructure to operate such a system) this is generally not required with ethanol extraction. Both hydrocarbon extractions and CO2 extractions will often utilize ethanol for their finishing/purifying processes. Since ethanol is often used in these processes, by starting with ethanol as the common solvent throughout you will have better process control.

From an operational perspective, ethanol requires a C1D2 operating space and because ethanol (as differentiated from other solvents used in essential oil extractions) can be recovered, it represents a sustainable extraction solvent for use in your production processes. This makes the reagent ethanol cost effective, as it can be recovered and reused for future extractions.

The physical properties of ethanol make for a highly efficient organic solvent to utilize in essential oil extractions and because ethanol provides for a soluble and fertile extraction environment, this allows for high solubility of the desirables (i.e., essential oils and cannabinoids) and their relative affinity to the ethanol.

When considering solubility at a molecular level, one wants to consider polar and nonpolar solvents.

In general, this is relevant and has to do with the molecular balance of the relative polarized charge of the molecule.

For example, a polar molecule is water. Comparatively, common nonpolar molecules that we encounter in extraction are fats, waxes and lipids.

This is relevant because ethanol, while polar in nature, can behave as both a polar and nonpolar molecule when subject to certain conditions. This represents a strong explanation as to why ethanol is so useful in plant extractions and provides for flexibility to an end user. Ethanol is a form of alcohol and is classified as polar because of the difference between the electronegativity of the oxygen atom and the hydrogen atom, the hydroxyl group (OH) becomes polar end, which causes a slightly negative charge. The oxygen atoms, due to this electronegativity, have a higher affinity for the electrons, which are negatively charged. That said, while water (H2O) is quite a polar molecule, the oxygen being slightly negative (-) and the hydrogens being slightly positive (+) represent the reason for this affinity.

Ethanol is a Versatile Solvent

Due to its flexibility, ethanol is the ideal solvent for cannabis and hemp oil extraction. This is because ethanol has an affinity to extract the essential oils, otherwise known as a target compounds (cannabinoids like CBD and THC), from a cannabis or hemp extraction and ethanol will also attract both polar and nonpolar compounds.

What makes ethanol such an effective organic solvent for essential oil extractions is its ability to adjust while subject to temperature. For example, if an extraction is performed at room temperature, because of the polar and nonpolar characteristics of ethanol, both the targeted compounds as well as the fats, waxes and lipids (undesirable compounds) will be extracted. Comparatively, when the extraction is performed under controlled and cold conditions, this will isolate the ethanol and enable it to carry forward the targeted compounds, while leaving behind the fats, waxes, and lipids.

Ethanol provides for greater flexibility than other extraction methods. These characteristics of ethanol are well known and when coupled with the ability to control temperature and associated conditions, make the use of ethanol ideal in an extraction process.

Please contact CBG Biotech to learn more about the use of ethanol in your extraction, purification, and solvent recovery processes. Thank you.