In 2020, Formlabs took on a new 3D printing project after hearing news of a COVID-19 nasopharyngeal test swab shortage and wanting to help the hospitals in any way that they could. The nasal swabs are critical for COVID-19 testing and Formlabs knew that they had the capability to 3D print the swabs used in testing kits. Spectra Photopolymers, Formlabs' northwest Ohio location, was already an FDA registered facility, but they would need to significantly increase their 3D printing capacity in order to produce thousands of test swabs to help with the influx of cases impacting Ohio.

As swab production quickly escalated, the amount of IPA being used rapidly increased and there were concerns over the environmental impact and the cost of consuming such large quantities. Spectra had previously invested in IPA recyclers for small batches of solvents, but in order to keep up with the increased volume their team began researching different types of solvent recycling machines. 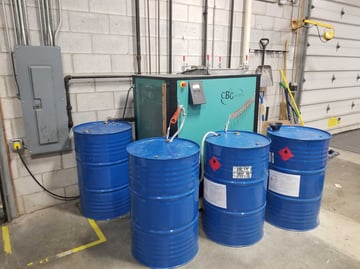 Spectra Photopolymers invested in a SolvTrue™ S1500 Solvent Recycler in order to significantly reduce the amount of IPA needed for their large 3D printing project. They began recycling IPA used in parts washing for over 100 3D printers and were able to recognize an excellent ROI in a short period of time. Ian Stafford, plant engineer at Spectra Photopolymers, said "due to the amount of IPA we were using, the IPA recycler paid for itself within 30 days." Their SolvTrue™ S1500 Solvent Recycler was running at capacity, recycling 25-30 gallons of IPA per day.

By investing in the S1500, Spectra gained better control of their IPA supply, making them less susceptible to swab production interruptions, and they were able to save hundreds of gallons of IPA, reduce their waste footprint and greatly increase their sustainability commitments.

Reach out to start the conversation with the experts at CBG Biotech.